This past August saw the death of Pat Leo O'Doherty of Derry- artist, Gaeilgeoir and one of several "cultural hostages" who were interned during the 50's simply for speaking Irish.

Mr. O'Doherty was an active promoter of the aims of Conradh na Gaeilge (the Gaelic League) over the past six decades. He became widely acknowledged as an enthusiastic tutor to countless Irish language students.

'Pat Leo' or "P.L", as he preferred to be called, attended the Christian Brothers 'Brow-of-the-Hill' primary school and technical college. He was one of the earliest beneficiaries' of the Eleven Plus examination process. Such enabled him to befriend many other young scholars, including some who later became world-renown figures, then enrolled at St. Columb's College.

Coming home, on a break from studying art in Belfast, he and another Gaeilgeoir, who hailed from nearby Rossville Street, where stopped by B' Special police, before being taken to Strand Road RUC barracks, under provisions of the draconian Special Powers Act. Both had been conversing in their native tongue at the time. Within hours, and without their families being informed, the two young friends were interned without charge or trial.

Irish language media referred to those who endured a similar fate as being “cultural hostages” while welcoming the fact that native language classes defyingly continued in spite of incarceration..Alongside hundreds of other detainees, who considered themselves to be Irish citizens, “P.L” refused to sign what was known as “the paper”. He was held at HMP Crumlin Road, Belfast, from the summer of 1957 until eventually being released in the spring of 1960.

His keen educationalist characteristics remained intact reflected in his decision to join the teaching profession. Past pupils describe him as "a quiet, popular and dedicated teacher". He taught a number of subjects, locally and in London, where he resided most of his remaining life. His last known local post was at St. Colman's High School in Strabane, after being engaged by its principal, Mr. J.E.P. 'Rusty' Gallagher, in the early 1960s.

"P.L" is also remembered by surviving contemporaries as "a brilliant cartoonist". His art work also included illustrations, particularly for Irish language publications. They also point to a diversity of talents including being "quite an actor and stage-hand” in a number of Irish language drama productions.

He was the eldest of five sons and a brother of four sisters whose well-known late parents were Harry (1899-1989) and Mary Ellen O'Doherty, née Hegarty, Strabane (1908-2007). Mrs. O'Doherty is often referred to, by 1968 veterans, as the “Mother of Civil Rights”. Pat Leo's remains will return to Derry to be met by twin sister and brother, Deirdre and Fionnbarra as well as surviving siblings living abroad.

22 August, 2015 01:00
Irish language enthusiast Pat Leo O’Doherty was a man with many claims to fame, from cartoonist to stained glass artist, actor to singer, and even a 'cultural hostage'.

While he spent a lifetime in London, Pat Leo never lost his love of Ireland and in particular his native Derry.

He was a member of one of the city’s best known families and a brother of civil rights activist Fionnbarra O Dochartaigh, one of the organisers of the original Duke Street march on October 5 1968.

Pat Leo, or PL as he was often known, attended the Belfast College of Art where he studied stained glass art among other things.

While on a visit home in 1957 he added another entry to his growing CV, compliments of Crumlin Road jail.

As he walked with a fellow Gaeilgeoir along Derry’s Rossville Street, he was stopped by a 'B Special' who had overheard the two young men speaking Irish.

According to another friend, Dermot Kelly: “Within hours and without their families being informed, the two young friends were interned without charge or trial. Irish language activists all over Ireland took up their cause, describing them as 'cultural hostages'."

While in 'the Crum', Pat Leo would while away the hours honing his skills as a cartoonist, invoking the anger of one particularly belligerent warder with his mocking sketches of the guard.

After three years as an internee, Pat Leo trained as a teacher and secured a job at St Colman’s high school in Strabane.

During this time his talents as a cartoonist were employed by a range of Irish language publications.

He later moved to London where he worked with the Northern Ireland Civil Rights Movement.

Following the shooting dead of Seamus Cusack and Dessie Beattie in Derry’s Bogside in 1969, Pat Leo was one of the organisers of a major demonstration at Trafalgar Square.

Dermot recalled: “Leo and another member stood to attention, 10 metres apart in the clear area in front of the speakers’ platform, holding black flags vertically erect until the silence commenced. The flags were then lowered to the ground. The thousands present erupted into prolonged applause.”

A native of the Bogside, Pat Leo died in London on August 5. He was 80 years old.

He will be waked on Monday and Tuesday at the family home at Crawford Square in Derry and his funeral will take place on Wednesday morning to Derry city cemetery following Requiem Mass at St Eugene’s Cathedral.

Pat Leo is survived by his partner Lynnette Broomhead, his brother Fionnbarra and sister Deirdre.

10:36 Tuesday 08 September 2015
Pat Leo O’Doherty who passed away recently was a man of many talents, a cartoonist, stained glass artist, political internee, Gaelic actor and singer.

His cartoons were contemporary, relevant and humorous. One such was drawn when the Londonderry Corporation were discussing the erection of the high rise Rossville flats which was opposed by the Anti-partition party. One member of this opposition declared that this development would destroy the traditional Irish architectural ambience of the Bogside area. The architecture referred to consisted mainly of rows of one storey red brick slated houses with outside toilets. Pat Leo’s version of traditional Irish architecture was a drawing of the ancient Grianan Fort with clothes lines radiating in every direction carrying a variety of shirts, combinations, other underwear and drawers.

During his studies at the Belfast College of Art the curriculum covered a wide variety of artistic forms but stained glass design became his speciality.

In his coursework he produced many fine examples of leaded glasswork but his talent was shown most clearly when one of his tutors bought his entry for an end of term examination.

While Pat Leo was interned in the Crumlin Road jail he put his cartoon skills to accurate critical use on the prison walls. The most hated warder was a bullying loudmouth with big feet who Leo depicted as a huge pair of boots topped with a large mouth and a balloon caption of the warder’s latest comment.

The subject of the cartoons recognised himself but despite roaring and bullying he never succeeded in identifying the artist.

On release Pat Leo spent a period at home trying to reinvigorate his artistic career. During this period he was a keen promoter of the Irish language in Derry and a member of the Craobh. In the annual Feis Doire Cholmcille he competed in the traditional singing competitions and earned himself the title of ‘The Feis Perry Como’ because of his relaxed and confident style.

In the 1950s a period of high unemployment and religious discrimination, Pat, like many others emigrated.

He went to London and lived in Hampstead where he socialised in ‘The Bunch of Grapes’ with a group of journalists and artistic types which included the late Seamus McGonagle from Derry. It was there that he met his life partner Lynette who was a graphic artist. 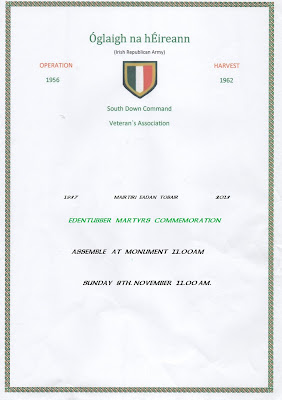 Oration to be given by Mick Ryan (Dublin), seen below speaking at last year's comm, flanked by fellow Op. Harvest veterans Oliver McCaul and Dan Moore. 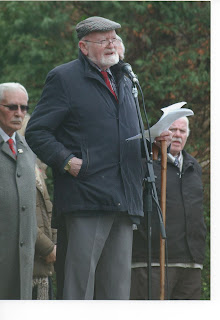 The high cross at Edentubber: 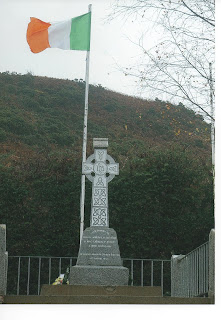